I’ve been thinking of making donuts for the past 2 weeks, so I knew today was the day to finally make them!  An airy soft donut, filled with either vanilla or chocolate pastry cream and rolled in sugar; what could be more dreamy!?  I’d also like to warn everyone that I am going away next week to help a friend move cross country so there might not be a new recipe posted for a little bit!  But don’t worry I’ll be back soon! 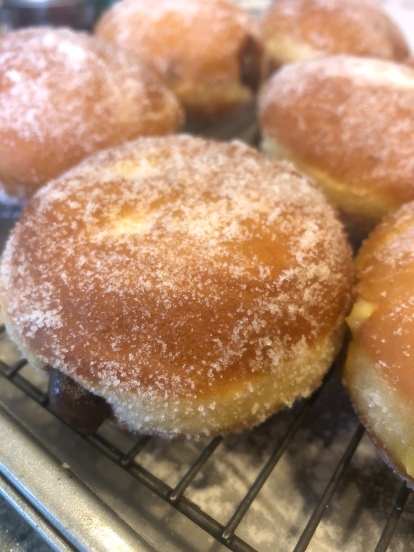 Time for some donut history!  Donuts were created in Europe. The ancient Greeks would fry pastry dough and top it with honey.  Another donut variation was very popular in Arabian countries.  They would fry yeasted dough; these donuts became very popular all throughout Europe in the 1400’s.  Donuts were introduced to America by Dutch immigrants and Pilgrims.

Donuts have a very long history in America.  They were sold during World War 1 by female Salvation Army workers wanting to bring a taste of home to soldiers in France.  Donuts were also very popular during the Great Depression since they were cheap to make.  Donuts were even given to immigrants coming to America through Ellis Island in the early 1900’s!

Also popular in Jewish history, donuts are known as sufganiyot.  They are fried dough usually eaten at Hanukkah!  William Rosen, a son of Jewish immigrants, ran a catering business.  His two most popular products were coffee and donuts; so he decided to launch a business in Quincy, Massachusetts in 1948 only selling these two things.  He called it “The Open Kettle.”  Two years later he changed the name to “Dunkin Donuts.”  It took off and 5 years later he opened another location and more followed.  Today there are over 5,000 Dunkin Donuts in the world serving 2 million customers a day!