The weather on Long Island these past few days has been the opposite of summery.  In order to turn the mood around, I made my Key Lime Pie today!  Besides limes being a main component of Key Lime Pie, sweetened condensed milk is also a large player.  I decided to make my own homemade sweetened condensed milk after forgetting to buy a can at the store.  The sweetened condensed milk took about an hour and I made it the night before.  The pie was also very straight-forward.  First make the graham cracker crust, then combine the five ingredients for the filling and once the pie is cooled cover it in sweet whipped cream and some lime zest!

Key Lime Pie is a very American dessert, created in Key West in the 1800’s.  During the 1800’s sponge fishermen were all over Southern Florida and they didn’t have many supplies on their ship.  They did however have sugar, eggs, canned milk, crackers and citrus fruit.  By combining these ingredients they created the first generation of the Key Lime Pie.  In the 1890’s, a Floridian millionaire, William Curry, had a cook named Aunt Sally.  Aunt Sally perfected the Key Lime Pie and no one ever looked back.

Key limes, the main ingredient, also has an interesting story.  Key limes were brought to the islands in the 1500’s from the Mediterranean by conquistadors.  They were all over the Florida Keys for hundreds of years.  However, in 1926, a hurricane demolished much of the key lime groves and instead of replanting them, Persian limes were introduced.  To this day, key limes can be found in some backyards but over all Florida isn’t a key lime producer.

Note:  As it’s simmering and as you near a thicker consistency the milk will be very bubbly and will start to turn a caramel color.  Watch it very carefully and pull off the heat when the milk is thick and has a molasses consistency. 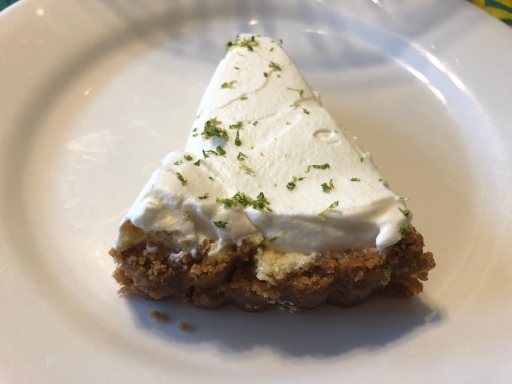